This interview is very solid to say the least. He exudes confidence and has a very laid back appearance when speaking English. He is very competent overall in the language (upon seeing this interview) even though that it is pretty clear from the start that he is not a native speaker. This is not meant to sound as blunt as it does – what I mean here is that the Dutch accent is quite noticeable but only in a subtle way.

Within the first minute, you can tell that John de Mol is not a native speaker – not by anything massively noticeable, in subtle ways, such as pronunciation with certain phonemes, word order and grammar. This sounds like I am going to slate his interview, but on the contrary, there are more positives than negatives!

There are general issues with the ‘th’ sound – this predominantly comes out as ‘d’. This is audible throughout the interview although there are certain moments when you clearly hear ‘th’. There is also a slight ‘sh’ sound as opposed to ‘s’ as well as quite a strong ‘r’ for example, at around the 6 mins 15 mark when he says the word ‘border’ and again at 8 mins 30 where he says ‘open the doors for everyone’. This is something quite common with Dutch speakers of English and often remains a tell-tale sign that a person is not native and is quite a difficult trait to get rid of – even with lessons.

There were a couple of word order and grammar ‘issues’ with the interview. On occasion the word order was quite Dutch, for example, around 5 mins 40 you hear ‘you bring for a few hours a day’ as opposed to ‘for a few hours a day you bring’ and ‘the health of the people’ around 3 mins 50 mark – which is a typical trade mark of Dutch English – saying ‘of the’ rather than making it a possessive ‘people’s health’ or the participant’s health would have been better. Also at just over 4 mins he said ‘he read in a plane an article’ instead of he read an article on a plane’. There was a slight mispronunciation of the word ‘towards’ at 2 mins 38 where the stress was placed on the first syllable rather than the second.

There were a couple of grammar slips as well. These did not in any way affect the coherency or fluency of the interview – this must be said. However, around the 3 mins 48 mark, he said, ‘so afraid to hurt people’ where ‘so afraid of hurting people’ would have been better. There was one noticeable grammar mistake around the 8 minute mark where he said ‘so many space in developing’ where he should have said ‘so much space’.

Coherence of the interview

I feel that, in the light of the above, I have been rather critical, but these are the things that I pick up on! This being said, there are numerous positive things to pick up on. His pace is very relaxed, in general his word stress is very well placed and he uses a lovely range of vocabulary. There was one instance where there was a very Dutch translation of ‘I thank God on my knees’ where (I think) ‘thank God’ would have sufficed. This interview flowed extremely well, no question about that. John de Mol appeared completely at ease when using English and to be fair has a very high level. His answers were very broad and used nice vocabulary such as ‘intrigued’ and he was more than capable of bringing his story to life. At the very beginning, he sounded a little staccato, but this disappeared very quickly.

This was a very good interview, this cannot be argued with. John de Mol has an extremely confident air about him that nobody can deny. Fair enough, there was the odd ‘mistake’ during this interview, but nothing can take away the fact that this was a very solid, informative and very educated interview which threw some light into the wonderful and relatively new world of reality television. 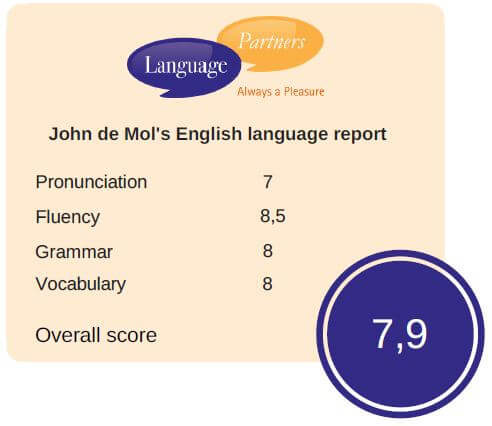