This interview, although 10 minutes long – only includes a few minutes of Max Verstappen actually speaking and therefore only gives quite a limited view on his range of vocabulary.

General issues and pronunciation
This interview focuses on one topic (albeit a very big one) – that of him winning the Grand Prix. The dialogue is given at a pretty good pace and with some very good examples of intonation towards the end making it flow pretty well. At the beginning, when he described the champagne as ‘very good taste’, I wasn’t expecting that much from the interview at all – I was prepared to be disappointed. However, my doubts quickly disappeared and he was able to expand on his answers well, even though his vocabulary was a little limited. There are a couple of issues with pronunciation, which are typical to Dutch native speakers. For example with ‘th’, which on most occasions came out as ‘t’ or ‘d’. This being said, it didn’t cause any misunderstandings whatsoever.

Max Verstappen was able to give lengthy answers although he kept to relatively simple sentence structure and familiar vocabulary. Just after the one minute mark in the interview he said ‘focusing a lot to make no mistakes’. It was perfectly understandable, but it would have been better if he had said ‘focusing a lot on making no mistakes’. His pronunciation was generally very good.

Max Verstappen is still incredibly young and most probably has a grueling schedule and I am sure that learning English grammar is not on his list of priorities! As time goes on, he will get more opportunities to speak English to the world and I am sure the more he gets to do this, the better he will become. For someone who has been catapulted into the spotlight at such a young age – he dealt remarkably well with the questions, which towards the end were quite lengthy and complex.

Coherence of the interview
Max Verstappen delivered his interview with lots of enthusiasm and a good range of intonation, which really got his point across and added emphasis at the correct points. He answered all the questions fully. In the second half of the interview when he speaks – at around the 6 minute 30 mark he was on about Kimi Räikkönen, saying he ‘was always putting pressure’ – maybe ‘turning up the pressure’ would have been more appropriate and at 8 minutes 30 he said ‘gives a lot of pressure’, as opposed to ‘puts you under a lot of pressure’. These are expressions that will come with time.

Conclusions and ratings
This was quite an emotional interview – with a very big win still sinking in! Max Verstappen has quite a Dutch sounding accent, but his intonation and grammar were very good on the whole. There were no real verb tense issues as such. From this perspective, it was quite simple – the interview referred to the race and the preparation etc. so did not really give him the opportunity to put all the verb tenses into practice. The only ‘mistakes’ that were made should be rectified with experience. He is 18 years old and one of the biggest names in Formula One right now and to be able to express himself to this level while having so much responsibility is commendable. 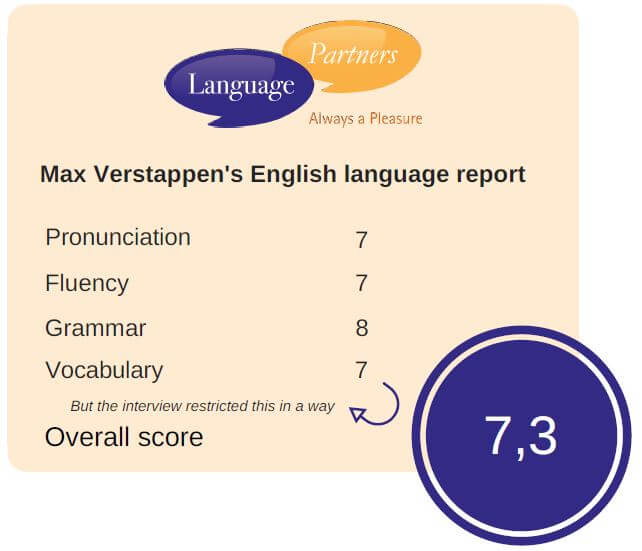