This interview was just over six minutes long but revealed lots about this formidable woman. There are a few issues with grammar and a few minor points with pronunciation and intonation – but she delivers the interview with grace and diplomacy and a definite air of a highly educated lady.

General issues and pronunciation
The very first word that Neelie said in the interview was ‘absolutely’ and this was a very apt way of opening – and her intonation was very convincing. What was noticeable for me from the beginning of the interview, was that Neelie had quite a strong Dutch accent which was apparent especially with ‘w’ and ‘th’ sounds. Her pronunciation of ‘water’ came across more as ‘vater’ and ‘the’ more as ‘de’. This is a very common issue with Dutch nationals but of course, does not cause any misunderstanding anywhere throughout the interview.

On the whole there was a definite Dutch accent in the background although this being said, her English accent came across as highly educated. There were a couple of intonation issues especially with the word ‘innovative’. Twice during the interview she placed the emphasis on the ‘v’ rather than on the first ‘I’ – which although was slightly wrong – actually somehow fitted with the accent she adopted.

Something that struck me at the start was her use of the word ‘for’ where ‘because’ would have been more natural for an English native. To be honest this is language more common with more mature generations and indeed I have heard it quite a lot during conversation classes. Grammatically it is not wrong – it just comes across as a little old school – a little old fashioned. At the 3 mins 37 mark she uses the word ‘examples’ and instead of a short ‘a’ sound, she makes it longer – like in ‘bar’ or ‘rather’. This is quite common with highly educated people – there is a slight tendency to over do the accent.

In a couple of places there were grammatical errors. At around 3 mins 42 she talks about her advisors. One she mentions as being ’11 year old’ and one as ’94 year old’ as opposed to ‘years’. She then goes on to say ‘she is writing blogs’ as opposed to ‘writes’. Sometimes words come across as a little clipped or staccato which is also common with Dutch nationals – but does not cause any misunderstanding whatsoever.

Coherence of the interview
The interview was seamless and Neelie came across as confident and gave very full and diplomatic answers to questions that were being asked. It has to be said though that the subtitling of this particular clip is not without fault. Noticeably, at 1 min 44 when ‘build’ was written instead of ‘built’!

The range of vocabulary and the expressions that she used were very natural – granted, there were a couple of mistakes here and there but you cannot deny that this lady can come across as convincing and persuasive during an interview. The errors are not ‘howlers’ – just very common ones that occur very often with Dutch people when speaking English.

Conclusions and ratings
Neelie Kroes sounded very relaxed and extremely professional during the interview and used some nice appropriate language throughout. There were a couple of minor pronunciation issues and a few grammar bits and pieces. To be honest, her demeanor and her facial expressions reminded me of Julie Andrews or Maggie Smith who are both formidable icons in their own right. 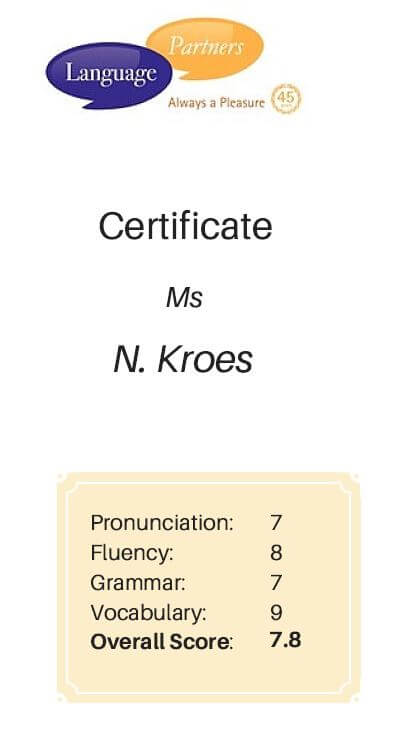