Language Partners > Engels > Why do the English insist on being polite?

Why do the English insist on being polite?

Politeness is better than logic. You can often persuade when you cannot convince.
– Joss Billings, 19th century American writer

If you’ve had the privilege of growing up in the Netherlands, or perhaps the pleasure of spending some time in this country, you will probably agree that the Dutch certainly don’t beat around the bush; they never waste time using more words than necessary to tell it like it is. They are not afraid to dig into topics like religion, politics, immigration or one’s salary.

The Dutch view this direct communicative style as a virtue of sincerity, but some outsiders might consider this to be a rude or tactless approach. While following an English course, Dutch speakers often experience that this cultural habit inadvertently impedes their goal of achieving English fluency.

How can you avoid leaving a negative impression on your English counterparts without compromising the vigour of your message? 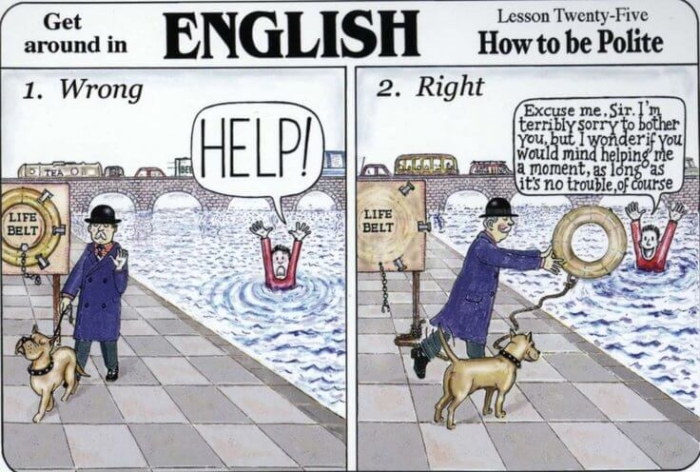 Zeg het maar vs. How may I help you?

When you enter a shop in the Netherlands you may be warmly greeted with ‘goedendag’ (good day), which is quickly followed with ‘zeg het maar’; this roughly translates to ‘just say it’. A basic level of the Dutch language would be enough to help you interpret this as a rather common way to welcome your customer and indicate that you are ready to take their order.

Conversely, a phrase more commonly recognized in countries where English is the lingua franca (i.e. common language) is ‘how may I help you?’ This example demonstrates the cultural variation between Dutch directness and English politeness. Even though being overly polite is often stereotypically recognized as a British trademark, this cultural etiquette is notably present in other Anglo-Saxon countries.

Being polite is essential

In English-speaking countries, the need to be polite and to use the correct expression is essential. Not only will others appreciate it, they will regard you as a highly competent English speaker. From this perspective one might deduct that it ultimately boils down to the words you choose to use to bring your message across. Failure to use the right expression could easily be misinterpreted depending on the cultural context, and rightfully so. Politeness is ultimately about treating people with respect, not to mention that you are more likely to achieve your objectives and be taken seriously by your peers.

Diplomacy may not always seem appropriate or necessary but it is common to adopt a polite approach when we don’t know our conversation partner very well. If you are somewhat familiar with English grammar you might already know that modern English doesn’t really have a polite form of address. We use the same personal pronoun ‘you’ to talk to a dear friend or a complete stranger, whereas the Dutch use ‘u’ for the latter. This means that we have to use specific language in order to demonstrate deference and consideration. Mastering the tactful art of diplomacy might not convince your supervisor to approve your holiday request, but it will undoubtedly garner praise from your native English colleagues and fellow non-native speakers.

Invest some time in perfecting the jargon of English politeness and you can rest assured that your native Dutch vigour won’t be compromised or lost in translation.

Alma is an English language trainer and writer from Canada. She is passionate about education, exploring new cultures, and creative collaboration.
Engels