10 Interesting Facts about the Dutch Language

Are you learning Dutch? Do you find yourself confused or amused in the Netherlands or Belgium? Are you trying to puzzle it out by communicating with other expats who know a thing or two about hagelslag? Have no fear, it’s not just you! Dutch is even stranger than you thought. Read on for ten interesting facts about the Dutch language.

Given their Germanic roots, Dutch, German, and English bear some similarities; Dutch is probably somewhere in the middle between English and German. While Dutch does enjoy leaving the verb at the end of the sentence occasionally, like in German, it doesn’t have the cases German does, which makes it more akin to English. Further, where German has three (nominative) definite articles, der, die, das, and English one, the, Dutch has two, de and het.

However, Dutch pronunciation is notoriously difficult. Your pronunciation of Dutch words, e.g. Scheveningen, tells native speakers whether or not Dutch is really your mother-tongue; this was the downfall of more than one German spy during WWII.

2.   You already speak some Dutch

If you’ve ever eaten coleslaw after leaving some cookies for Santa Claus, then you’ve definitely used a few Dutch words, including: koolsla, koekje, and Sinterklaas.

There are many other words in English that are similar to their Dutch cousins, such as:

So, you see, you’re half way to learning Dutch already!

3.   The first words written in Dutch date back to the 6th century

A love poem scribbled on scrap paper to test a writing implement in the 12th century was long considered the earliest Dutch writing.

Have all birds begun nests, except me and you? What are we waiting for?

Romantic lot aren’t they? Unfortunately, the current oldest manuscript written in Dutch turns out to be some old boring book on Salic Law from the sixth century.

4.   Flemish is not a language

Nope, it’s not. The people living in Flanders – the Dutch-speaking part of Belgium – speak Dutch, albeit a variant of Dutch called Flemish. This is reflected in Belgian policy: The official language of Flanders, and one of the three official languages in Belgium, is Dutch. The other two are French and German.

5.   There’s a difference between Dutch and Deutsch, but there didn’t used to be

Sometimes, English speakers even go completely against the tide of all languages involved by calling that group of people in the USA Pennsylvania Dutch when they are actually of German background!

6.   The Dutch language, like English, is a cheeky thief!

That’s right, Dutch is guilty of ‘stealing’ words from all over the place, especially from French and Hebrew, as well as several other languages. If you were a right posh Dutch-speaking person back-in-the-day, you dropped French words into conversation every now and again just to show how posh and upper-class you were. Many of them stuck! Amongst lots of others, Dutch words of French origin include: au pair (nanny), bouillon (broth), bureau (desk or office), humeur (mood), jus d’orange (orange juice), pantalon (pants), etc.

Some Hebraic words made it into Dutch as street slang, including: bajes (jail), geinig (funny), jatten (steal), mazzel (lucky), tof (cool). Nowadays, Dutch finds itself influenced by the variety of cultures that speak it and the multiculturalist society of the Netherlands. You might hear street slang comprised of Moroccan, Surinamese, and Antillean words, and of course English is all pervasive in all modern genres of Dutch, especially “social media language” and texting abbreviations.

7.   The longest Dutch word in the dictionary is 35 letters long

Meervoudigepersoonlijkheidsstoornis means multiple personality disorder. While it is sometimes written as two words, some linguists argue it changes the meaning. Of course, as Dutch is a language capable of compounding nouns, it is possible to make some monsters, especially when it comes to bureaucracy.

English, in comparison, only features the measly 28 characters of antidisestablishmentarianism, which refers to a group of people who loved the Church of England and didn’t want to see it disestablished as the nation’s official church in 19th century England.

German, like Dutch, has some linguistic wonders. In the Duden dictionary – the authoritative German dictionary – you’ll still find words like the 33-letter Arbeiterunfallversicherungsgesetz (worker accident insurance law). In the Duden’s corpus (database) of German words, some titans pop up, such as the 67 letter Grundstücksverkehrsgenehmigungszuständigkeitsübertragungsverordnung, which doesn’t make much sense in English either: regulation on the delegation of authority concerning land conveyance permissions.

Even if you are incredibly scared and let out a scream, you have to remember your Dutch consonants – eight of them in fact. What you do is called an angstschreeuw, which literally means a scream of fear. English does hold its own with the seven consonants of rhythms, but that’s the only common word with so many. On the other side of things, the Hawaiian word hooiaioia, meaning certified, has eight consecutive vowels.

9.   Dutch is a regulated language

The Taalunie – the Dutch Language Union – is a public organization managed by the Dutch and Flemish ministers for culture and education. It is responsible for both standardizing the Dutch language and promoting Dutch language and culture around the world. Algemeen Nederlands, or AN for short, is Dutch for Standard Dutch, and it is what is taught in the schools of Dutch-speaking countries. It is set out and defined in a book called the Woordenlijst Nederlandse taal, the Word-List of the Dutch Language. However, this book is the authority only on the spelling of Dutch words; for the meanings of said words, grab yourself a “Fat van Dale”!

The leading dictionary of the Dutch language is the Van Dale Groot woordenboek van de Nederlandse taal, i.e Van Dale’s Great Dictionary of the Dutch Language, but the locals call it the Dikke van Dale – the Fat van Dale – for short. This is probably due to its enormous size, though many pocket, electronic, and online editions are available to accommodate the average Dutch-speaking person. The Dikke van Dale is the authoritative dictionary to which all turn when they require the definitions and uses of Dutch words. It has, therefore, a significant regulatory influence on the language.

10. The most important word in Dutch might just be “gezellig”

This word has no satisfactory, literal translation in English, though German-speakers – particularly Bavarians – will recognize it as gemütlich. Situations can be gezellig, as can people and places – it’s an adjective, the noun being gezelligheid. If something is gezellig, it is familiar, warm, friendly, cozy, and jovial. For example, enjoying a cozy dinner with old-friends in one of your favorite, quaint, little restaurants with some tasty food and wine is gezellig; being in a meeting at work is not gezellig!

Bonus: Dutch is weird and wonderful

In case you haven’t figured it out yet, Dutch is an interesting language. The only way to learn it is to dive right into the language itself and, of course, the culture. Even though the Dutch in general speak English quite well, acquiring (at least) the basics of the Dutch language is essential for you to be able to fully integrate into Dutch society.

It takes some time to adjust to your new situation of working and living in a new environment, but we’re here to help! Download our whitepaper below, in which our trainers and consultants will share some of their own experiences and tips on how to conquer both the Dutch language and Dutch business culture.

This is a guest blog post, written by Gregor Wills, travel writer.

A practical guide for expats living in the Netherlands. 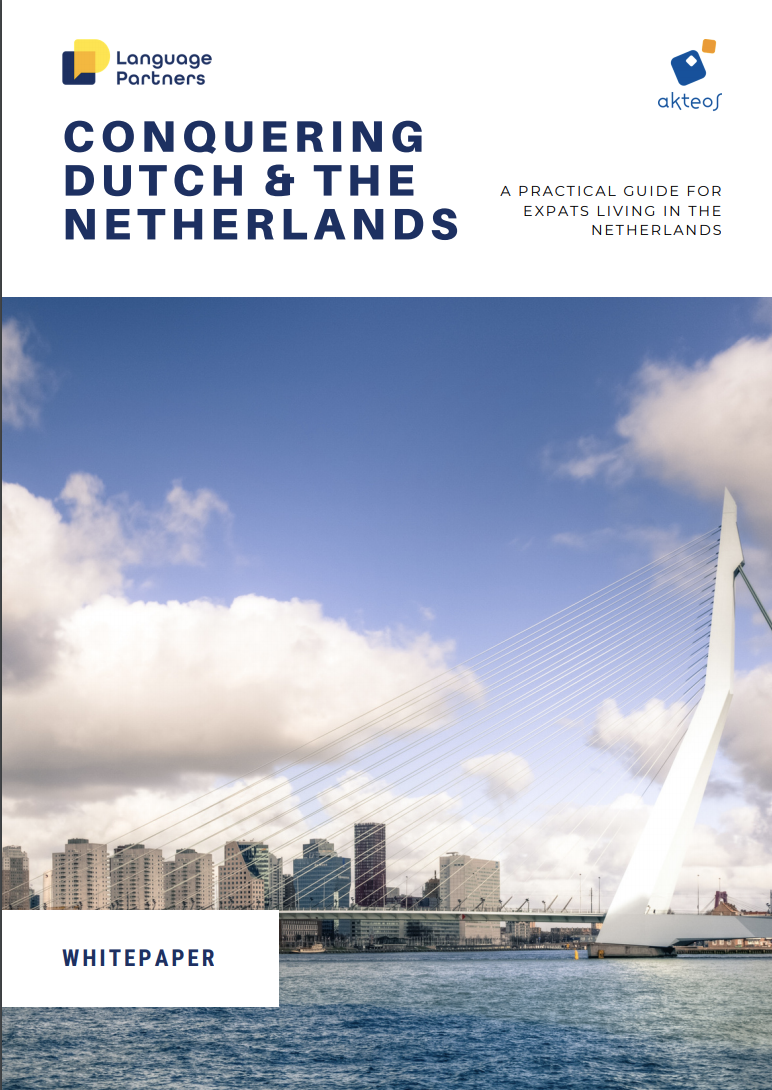 Receive our best language tips free in your inbox.

If you disable this cookie, we will not be able to save your preferences. This means that every time you visit this website you will need to enable or disable cookies again.