This was only a very short interview but what struck me first was that he sounds every inch the veteran actor – and that being in English. His accent sways heavily towards American, but not completely over the top, it sounds very natural and it is absolutely lovely to listen to. He sounds completely at home using English and is clearly of native speaker level.

General issues and pronunciation
There are not many issues as such that I can pick up on. Once again, as the standard is so high, it is a question of nit picking small and irrelevant, what I can only say, must have been ‘slips of the tongue’. There is only one tiny grammar mistake (and I feel terrible even calling it a mistake). At around the 1 minute 20 mark, he was talking about his character and said ‘His son has to tell him what things looks like’, as opposed to ‘look like’. Also around that time he says ‘he hears things’ and the ‘s’ sound is ever so slightly ‘sh’. There is also a slight hint of ‘d’ as opposed to ‘th’ in words like ‘that’ which can be a common issue for Dutch natives – but it is barely even noticeable in this clip – it was only because I was listening out for it that I heard it – my Dutch husband too!

During the interview, he uses a very eclectic mix of expressions and right at the end when he is talking about costumes he says that they are ‘a tad more serious’, which is a lovely way of putting it. He uses a nice range of vocabulary throughout the interview and incidental expressions like ‘what shall we say’, ‘let’s say’ which adds to the natural flow of the interview. His pronunciation is extremely clear and his intonation is excellent, particularly towards the end when he was talking about costumes.

Coherence of the interview
This was a lovely interview, very relaxed and very easy to listen to. The answers fuelled the imagination as to what the film is going to be like and he was able to add emphasis to words properly so in effect it was almost like he was telling a story. As funny as it sounds, it was actually like listening to someone reading a story, rather than giving an interview, the ebb and flow of his voice kept me interested – I almost expected him to say ‘and they all lived happily ever after’ at the end!

Conclusions and ratings
There are no major issues to really mark him down for – I like to give a good score for everyone in every category. 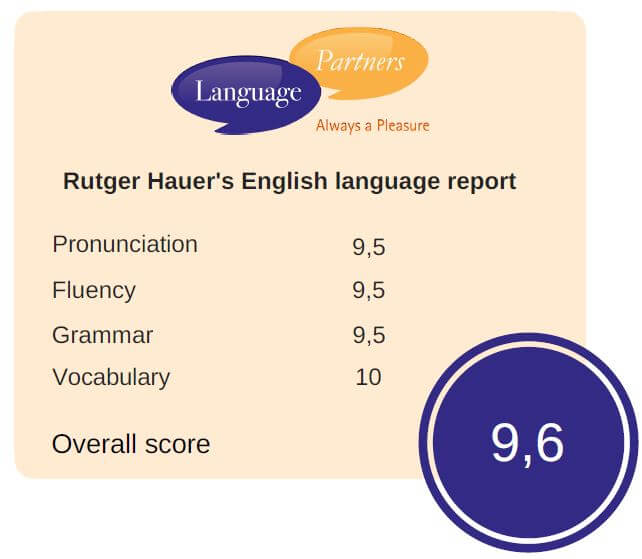